The Balinese, who use an alternate calendar for religious and cultural purposes, just celebrated their New Year a few weeks ago in a three day extravaganza that puts our NYC ball drop and fireworks to shame.

The weekend started off thunderously with Pengerupukan Day, which involves a massive parade of huge Ogoh Ogoh statues carried by rowdy and excited boys ranging from kids to young adults. Ogoh-Ogoh is a sight to behold: he’s a three meter tall monster of a statue, with wild bulging eyes, sharp, long horns and nails, protruding belly, wiry hair, and mocking tongue. We had a total of 26 eclectic Ogoh Ogoh’s in the parade that my friends and I were lucky enough to be a part of. We walked in front of our community’s three Ogoh Ogohs, one of them built by a dear staff member at the school we teach at. 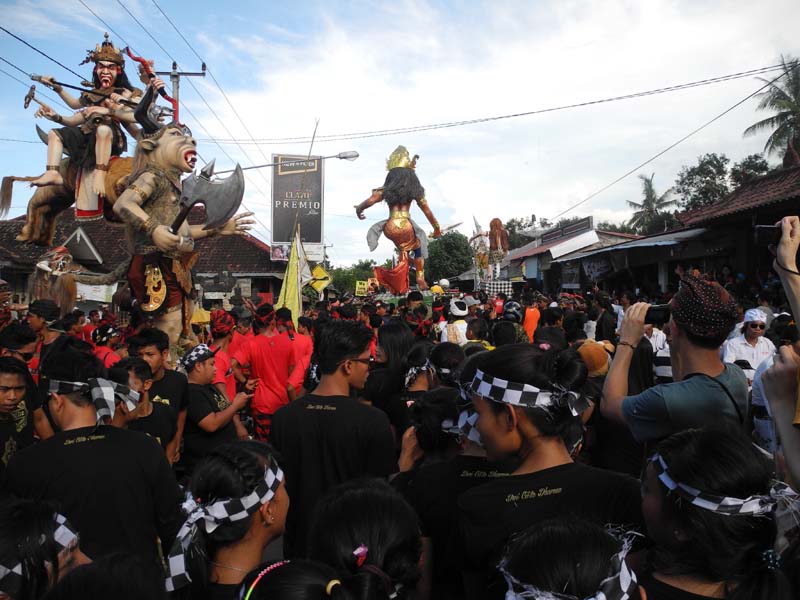 Marching through the streets on Pengerupukan Day.

We danced, chanted, and marched our way through the crowded streets, surrounded by Balinese young and old alike, snapping pictures and laughing the entire way. I remember seeing people forced to pull their cars and motorbikes over to the side of the road as we passed by, but I couldn’t think of a better way to be stuck in traffic. Anytime we reached an especially packed corner of spectators, the procession would stop and the boys would lift up their foam statues, raising the bamboo grids on which the statues stood high above their heads, and jumping around with them in an effort to make the statues dance; they’d run in circles and zig-zag their way through the street, and all I could do was stare in awe at the energy and happiness that radiated from the people all around me; this was their culture, and it was clear that they love it. 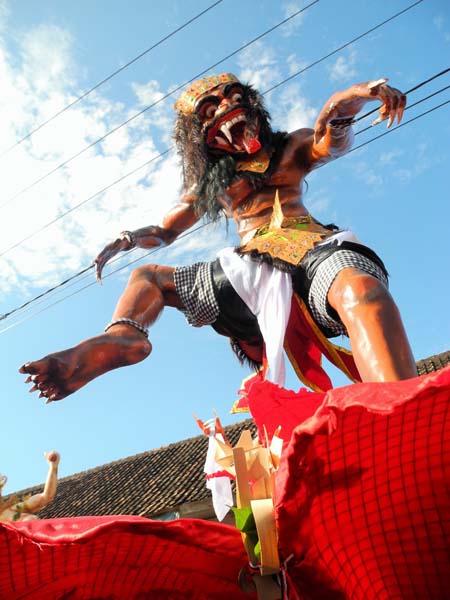 An Ogoh Ogoh statue towers above the crowd.

The purpose of the Ogoh Ogoh parade is to build a statue that represents all the bad spirits of the year, and, at the end, the statue is burned to represent a sort of cleansing for the New Year. This year, for environmental and safety reasons, they decided not to burn the statues, and rather set them up at different junctions on the road or beach for people to admire (if they weren’t torn apart by the crazy parading).

But, while Penerupukan Day was wild and fun, the next day, called Nyepi, or Silent Day, was the complete opposite. On this day, people are not allowed to work, build a fire, have fun, use electricity, or even leave their homes. It’s a day for relaxation and reflection, and it’s taken so seriously that security patrol the streets in order to enforce the peace, and even the airport in Denpasar shuts down for the entire day.

The volunteers chilled at the school for most of the day, but at one point I got restless, so my roommate and I snuck out and ventured to what we thought would be a deserted street. And while no cars or motorbikes were visible, the quiet street was full of children playing or riding their bikes, taking advantage of the lack of traffic. It was a wonderful, simple scene, very pure and innocent. We walked down the hill towards the market where we encountered some of our students who were heading to the beach; that’s when we noticed the security guard with a sword patrolling just a ways down the road, and we figured it’d be good to follow them. 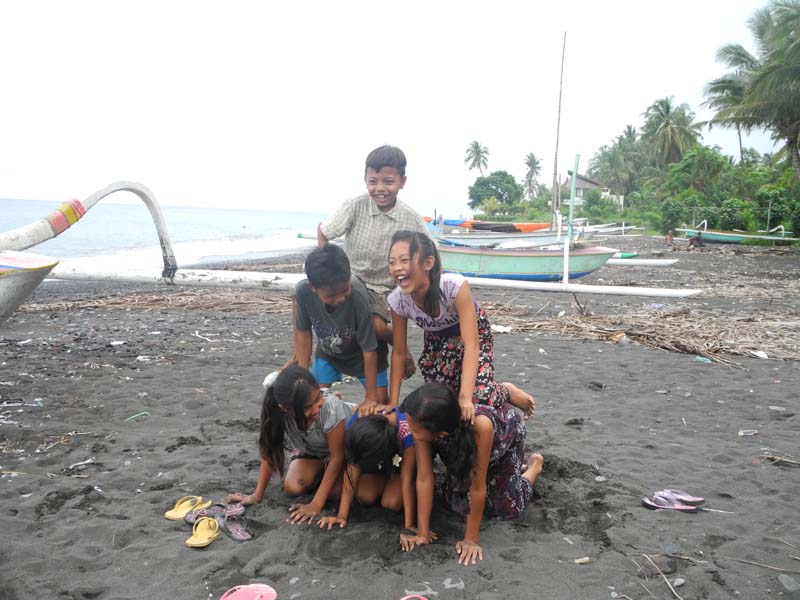 Children playing on the beach.

To our surprise, there were plenty of families littering the beach either swimming, playing, or just relaxing, enjoying the cooler weather and setting sun. We were told later that while in places like Ubud and Denpasar the rules for Nyepi are very strict, in more rural places, it’s almost traditional to take advantage of the lack of hustle and bustle. We joined our students in the water and returned to a darkened school, hearts full and ready for bed.

The following morning, called Ngembok Geni, we awoke to the sound of animated chatter, and I walked out to see Ketut’s (the founder of the school) entire family from Ubud roaming around, eating, and socializing. The hot day consisted of a water balloon fight with the volunteers, staff, and some of Ketut’s nieces and nephews. After, we were treated to the yearly boat ride, where we piled into the slim boats of the fishermen and were taken along the coast as the sun began to fall and paint the sky with hues of red and orange. We were on the boats for an hour, but it was so calming and enjoyable it only felt like 15 minutes. I marveled at the way the slight boat cut the water nimbly with all of its heavy passengers aboard, the way the motor sputtered but never died as it chugged along; we were so close to everything, sitting maybe two feet above the water, our feet dangling over the edges, the wind dancing with our hair and clothes. We could see every spectrum of color dotted along the beach as families barbecued, played games, and blasted music. 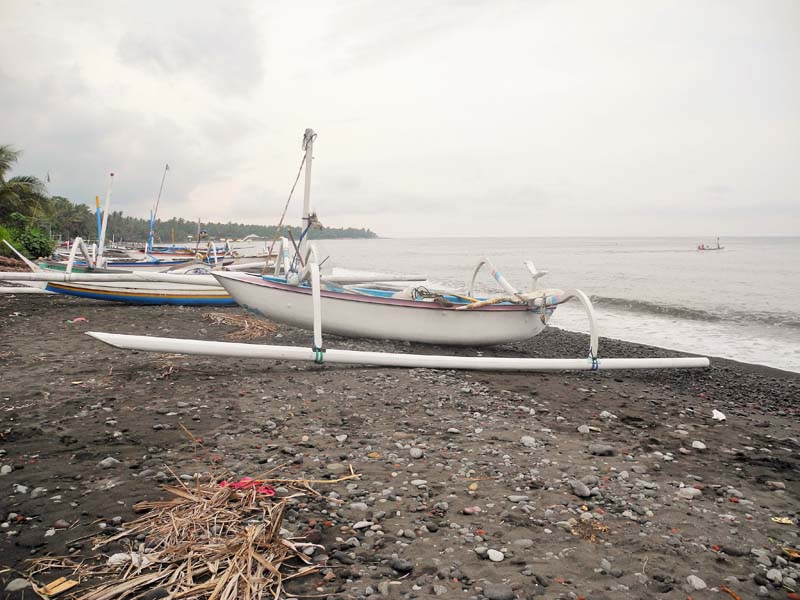 The boat we rode on Ngembok Geni.

Our party though came that night, where we set up giant loud speakers and laid blankets in the sand as the Balinese around us brought supplies and started cooking. There was non-stop laughter, dancing, and eating for the entire night, and a beautiful swim where if you floated on your back you were exposed to thousands of brightly speckled stars against the dark sky. It was during this moment, floating on my back, my ears only listening to the lapping waves, that I thought about where I was and truly what I was experiencing, what I was being allowed to experience.

I know how fortunate I am to be where I am, to be on this gap year at all, and that sense of wonder and gratitude grows stronger every day I’m away. But it was with this realization that I welcomed the New Year: these are the moments that change your life, the ones in which you realize you are living life exactly how you never knew you wanted to. How you never thought you needed to.