With my head spinning, eyes squeezed shut, teeth clenched, fists tight, knees locked, and toes curled I clumsily tumbled down a dark hole only opening my eyes to see bright flashing lights replaying short snapshots of memories back at me. After what felt like days, I dropped out of the sky, slammed on the ground, and slowly lifted myself off the dusty ground. In a daze, I looked around with squinty eyes and wondered where in the world I landed.

Maybe it was the heat, which felt like a hot and steamy July afternoon at the Burgaw softball field, or maybe it was the thick air filling my nostrils with strange smells, some good, others burning the hairs in my nose, but I could not process what happened to me. Feeling a lot like Alice with my blonde hair and dressed in my light, Carolina blue, I realized I dropped down into my own little rabbit hole, but unlike Alice, I wasn’t in Wonderland, I was in Ghana.

I didn’t have many expectations when I arrived in Ghana, but I couldn’t have possibly prepared myself for what I would find. There are some things that feel very normal to everyday life, but most others feel extremely odd, as if I’m in a parallel universe. People still have the same needs and wants here, but the standards and systems here blow my mind. *Fizzle Fizzle* Kaboom!

The most perplexing and terrifying thing here would most definitely be the transportation. Being a large city and the capital, Accra’s main roads are mostly paved with the exception of many potholes, but the divided roads normally don’t have any lines. This results in a chaotic ride with a noisy chorus of constant honking coming from every direction. Sometimes there will be three lanes, two lanes, or on many occasions, no distinct lanes at all. It’s not difficult to understand why all the taxis and tros tros look like they could fall apart at any instant; it’s like Mario Carts on steroids.

So what exactly is a tro tro? It’s the form of public transportation, similar to a bus system. Each independently owned and operated with its own personality, tro tros are large vans stuffed with about twenty-four seats that can take you to different parts of town for cheap, but they have to be filled up completely before the driver will take you to the destination, which can take any amount of time depending on where you are going and what time of day. Tro tros are usually hot and sticky and make me nervous, but everyone here uses them, and they get the job done.

The transportation system shocks me, but I know it’s normal for the people here. Transportation is just one of many things that makes me feel far from home. Coming here I didn’t expect to fit in as well as I did in New Zealand or Greece, but I didn’t think I would feel so out of place-silly me. There are moments where I feel like I’m watching myself experience Ghana, and I can only imagine how strange I look, and it’s not just the white skin against all the brown.

Living in a suburb of Accra, there aren’t many white people around; in fact, there aren’t any other white people around except for Inbar and John Mark. Even at Madina, the busy market place where you can buy anything (and also deserves an entire blog to itself), there are no white people. It doesn’t bother me that my skin color doesn’t match, and that is the last thing that I’m worried about. Like the locals, I gawk at any white person I see and excitedly whisper “Obruni, obruni!” as a joke. (Obruni means white person in Twi.)

This past Friday night the other volunteers and I decided to go into Osu, the most touristy part of the city, and eat a nice meal together to celebrate the week. After hitchhiking with a very nice man, a tro tro ride, and a twenty minute walk we found ourselves at Momma Mia’s, an Italian restaurant. We walked into the patio area, and to my amazement and surprise, all the tables were filled with mostly obrunis. This was the most white people I’ve seen in one place so far in Ghana, and my eyes couldn’t believe what they saw!

This is just the tip of the iceberg when it comes to differences between Ghana and home, but I believe it’s something I need to experience and understand (or at least attempt to understand). Ghana is my on little wonderland filled with the constant hum of the Rabbit saying “I’m late! I’m late!” because Ghana time runs at least an hour late-which is good for me because I’m notoriously unpunctual , putting me right on time here. The Cheshire Cat also appears to mischievously play tricks on me, leaving me more confused than before, and some days I’m like Alice trying to decide which piece of bread to eat to make me grow bigger or smaller depending on how I feel. It all feels a surreal, but I’m determined to embrace it. 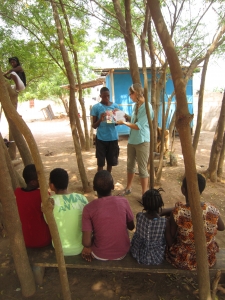 Story time during our walk

By Anna Brodmerkel|February 20th, 2014|Gappers in the Field|