My second month here in Hawaii I spent it on the north shore of Oahu in a town called Haleiwa. I’m currently volunteering for an amazing surf camp that focuses on teaching beginners how to surf and sharing Hawaiian culture. My day to day tasks include making breakfast, washing dishes, making either lunch or dinner, and packing snacks for the day out. The other volunteers and I have made açaí bowls, pineapple chicken, burgers, burrito bowls, and much more! Before the camp began, my tasks included helping set up the glamping tents for guests, washing sheets, preparing beds, painting lockers, grocery shopping, and organizing.

During the camp, I was lucky enough to be able to participate with the daily excursions. I had the opportunity to join in on surf lessons, yoga sessions, hikes, sightseeing, and beach days! I did an amazing surf lesson at Waikiki Beach and I now can catch my own waves and pop up! I’ve learned that if you’re single, you put a flower behind your right ear and if you’re taken you put it behind your left ear. I’ve tried traditional Hawaiian food and learned so many Hawaiian words during my time here. The stories I’ve heard and people I’ve met have shaped me in so many ways. I’m honestly seeing the world in a much different light and that’s what traveling does to a person. I now crave more adventure and I have a greater appreciation of nature. 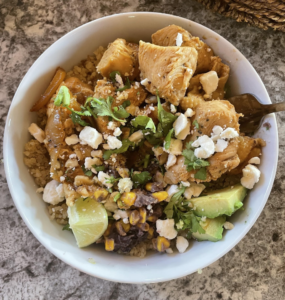 I’ve had the opportunity to learn from people from all over the world; France, Singapore, Germany, Netherlands, Russia, Amsterdam, London, Brazil, Ecuador, and etc. I learned that people in London use the word “fancy” in a much different way than Americans and that servers in Europe don’t typically introduce themselves at restaurants. Also, I was able to see how similar Portuguese and Spanish are and I was taught Chinese myths. The friendships I’ve made are forever lasting and I’m so grateful to be a part of such an amazing community.

Hawaii is truly such a magical place and everyday I’m amazed by the beauty that the islands contain. On my days off, I usually spend my time hiking and surfing. I’ve been very lucky and have had many people who have taken time out of their day to show me around the island. I’ve been exposed to so many different lifestyles and diets. I’ve tried plant based chicken strips and even gouda vegan cheese! Both were delicious and I definitely recommend trying it out! I simply cannot put into words the amazing experiences I’ve had and that island time is the only time I want to be on!