We both know that I couldn’t have done this the easy way. Most people go straight to four years of college, but I’ve never been the type of person to do it like everyone else. Somehow I always have to add my own unique spin to all of my life experiences (you’ll be glad to know that I’m still consistent in that). Unfortunately, the process of getting here hasn’t been like the Disney shows you love so much. I haven’t found my happily-ever-after love story yet (actually, quite the opposite in most cases) and I still don’t feel like I fully fit in with the people around me. But I’m starting to come to terms with that, and starting to question whether that’s such a bad thing after all. Just because my path doesn’t look like everyone else’s doesn’t mean that I’m doing something wrong; my journey in this lifetime is, and always has been, a little different than other people’s. I’m beginning to challenge the idea that my intensity of mind, body, and spirit is not something to be fixed, but rather something to be embraced. You were always unapologetically yourself, and I strive to be like you every day. 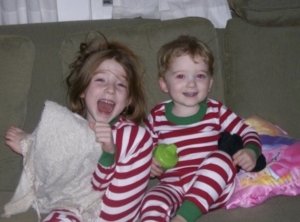 High school wasn’t as cool as you hoped and definitely wasn’t as fun as Alex made it seem in Wizards of Waverly Place. It mostly consisted of pushing myself to my limits every week, feeling just slightly out of place in every social scene, and trying to find a way of life that felt sustainable. Reality kind of sucks. But, you’ll be happy to know that football games were fun, I got my driver’s license, and I formed some really solid friendships along the way! So not all of it was bad, but it most definitely was not the fairytale that you daydreamed about (I still have wildly unrealistic daydreams, though. Some things never change). In the process, I got really close with my family. Mommy, Papa, and Miles are my best friends in the world, and my aunts, uncles, cousins, and grandparents are the support system that got me through the really hard times. I’m gonna miss them lots, but they’re rooting for me just like they rooted for you.

When I was a senior in high school (in other words, one of the big girls) I got super attached to the idea of going to Columbia University. I know you haven’t heard of it, but it’s a super smart people school in New York City (!!!). I even visited and fell in love with the campus, but then I didn’t get in and I was really upset for a while. I know you always dreamed of going to UNC, but after getting rejected from Columbia I really didn’t want to go to a state school. No matter how much I love Chapel Hill, I was super reluctant to end up going there. It wasn’t a great feeling, but I had no choice but to trust that everything would work out (spoiler alert: it did).

To distract myself from this uncertain future, I ran my first marathon in April. I know how much you struggled with running and soccer, and I did this for you. Marathon running for me isn’t something to brag about or a reason to put a 26.2 sticker on my car, but rather a way to explore exercise in a new way that doesn’t make me hate myself. My marathon was in Greece (!!!) on April 10th, and then my 18th birthday was the next day. I got this gap year opportunity on my birthday, which felt like a full-circle moment straight from Artemis herself (I also got to see her temple!!). Greece was everything you ever dreamed of and more, and we also went to Paris and London too. I came home and played my senior soccer season too, which ended on a relatively good note. My soccer friends are still my best friends, so that much didn’t change. I wish I could’ve told you back then that all of your sports struggles would someday get resolved, but I’ll have to settle with doing what’s best for me and ignoring the rest of the world. I also know that Future Lela will tell me the same thing about all of my current problems, which gives me a little peace of mind. 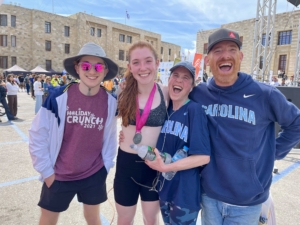 At first I was worried about going on a gap year and missing out on what all of my friends were doing. However, the Finalist Weekend for this gap year program was one of the first times in my life that I talked to a group of people my age who I truly felt like are on the same page as me. People who I instantly clicked with, who share some of my same struggles. Meeting these people (which I know you’ve been waiting for a long time) makes all of the heavy parts worth it. I spent two weeks this summer with them in Chapel Hill and it gave me a sense of hope about my future. Even with everything else changing around me, having a group of people I resonate with is what will get me through this experience.

Speaking of summer, it felt really strange as everyone got ready to leave. A less-than-pleasant senior beach week was the cherry on top for most of our friend group, myself included. Luckily, I’m still close to the people that I care about the most and I will definitely stay in touch with my closest high school friends in the future. But processing the gap year while dealing with the friend group moving on was really hard, especially since I know that this year will be different for me. No sorority, no parties, no football games, none of it. But, as you know all too well, I had to get over FOMO quite a long time ago. I know all of those things will be waiting for me in college next year, but it was still difficult to part with this idea of living the “normal” way. The safe way. The way that I easily could have taken, but instead I chose to do it differently. Another instance of trusting that what’s supposed to be in my life will be there.

I ended up landing my dream health policy internship in Washington DC (I promise it’s more interesting than all the monuments and boring history tours that you remember). I’m doing big girl things and living in a big girl city, and I even had to go to the mall to buy work clothes. It’s scary and exciting and exhilarating all at once. It’s definitely not the college experience you imagined – honestly, it’s much better. I get to live an independent lifestyle with the safety net of going to college next year. I even get to travel the world in the spring!! So even though it didn’t work out the way you imagined it would, somehow it ended up being 10x better than both of our wildest dreams. But, knowing myself, it’s not that surprising. Taking risks to walk my own path has always been the defining factor of who I am. 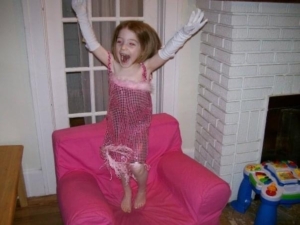 I’m sending you all the love, light, and positivity in the world. You never deserved the way you treated yourself, but I’m here to make things right and give both Little Lela and Big Lela the love that we deserve. We’re about to take on the world together in a whole new way, and I know that we’re ready.