Two and a half months ago, I was in a coffee shop listening to my friend take the stage with his bluegrass band. It was late, probably around 9:00pm (which I know isn’t that late for most people, but when you wake up at 5:30am every morning, 9:00pm seems late), when this stranger walked in. He wore a baggy jacket, a funky shirt, a mustard yellowish orange beanie, and a smile on his face. I couldn’t help but walk over to him. An instant crush you could say. So we started talking and didn’t stop until we were the last ones being politely pushed out of the shop. We got to the sidewalk, exchanged numbers, and went our separate ways. Me, on my bike riding back to my house, and him, on his feet walking back to his van. 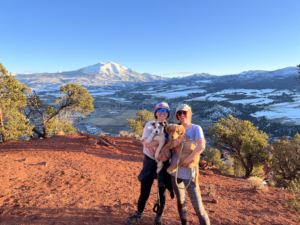 I only saw him a couple times after that. But our one interaction left its mark on me. While we were talking, I noticed a small, almost hidden tattoo on his hand. Of course I had to ask him about it and he told me he got it in Thailand and that it represents impermanence. While traveling and throughout his life in general, he has met so many people and been to so many places, but none of it lasted forever. That tattoo is his reminder to live in the moment since impermanence is a part of life.

For me, he embodied his tattoo more than anyone else I’ve met. He was different, interesting, and impermanent.

Throughout my gap year so far, I too have made lots of incredible connections and fallen in love with new places. At times it has been hard for me to embrace impermanence. When I was deciding to leave Puerto Rico after four months of discovering a life that I loved, it was challenging to say goodbye. But then I found a place I loved even more. A life I loved even more. I spent the past three months in Carbondale, Colorado, interning with Ascendigo, a non-profit that provides services for individuals on the spectrum. I was a ski buddy, helping out on the slopes practically every day. It was the best, most rewarding, active, social, challenging, and thrilling work I’ve ever done. After a full day on the mountain where I was as happy as I’ve ever been, I would bus back to Carbondale (the mountains were in/near Aspen), bike, run, xc ski, play guitar, cook, or do something spontaneous with friends I made in town. All the while I was surrounded by people who were always up for the next adventure. I was in love. In love with the life I was living. But again, I have decided to leave for a new adventure.

Now I’m back home. I’m in that weird space between two placements. It’s like being in an elevator, waiting to get to your desired floor. For a week I couldn’t decide which button to push, which floor to go to. But I’ve pushed the button. My next floor is Ecuador, where I’ll be volunteering at a school with children with special needs, taking Spanish classes, and living with a host family in the Andes mountains.

Uncertainty is the name of the game right now, but I can’t wait to see where this next adventure will take me and what life I will be living. I have so many questions and don’t have so many answers. But one of the many things I’ve learned this year is that you just don’t know until you get there. So I’ll continue to live in this elevator of uncertainty for the rest of the week. I’ll embrace the uncertainty, knowing one thing is certain: it won’t last forever. I’ll be in the air, flying to my next home in less than a week. While there, I’ll live in the moment and sacrifice some sleep every once in a while to the people who may or may not leave a mark on me. The people who help me learn. The people who welcome me into their lives. The people who make me laugh. The people who make this gap year so meaningful. The people with hidden tattoos.