Overcoming My Peter Pan Syndrome Through A Gap Year

Overcoming My Peter Pan Syndrome Through A Gap Year

The typical sufferer of Peter Pan Syndrome is described on the teletherapy platform Betterhelp as “someone…who does not want to enter adult life.” I consider myself incredibly lucky in life, and have had a magical childhood that stretched on much longer than most. I can now see that as the end of that childhood neared, I contracted a serious case of Peter Pan Syndrome.

Like many people in the height of COVID, I was plagued frequently with feelings of being stuck, stressed, bored, etc. But as I sat in my house for hours and months, the thing that troubled me most was finally realizing my childhood was ending. My relationships were changing. Nothing was as simple or exciting or fun as it once had been. I was terrified of slipping from the mystical forest of gnomes and fairies that was my childhood into a wasteland filled with things like faxing, taxing and listening to horrible jazz on hold with my health insurance company. I desperately needed something to look forward to in the first part of my independent young adult life. 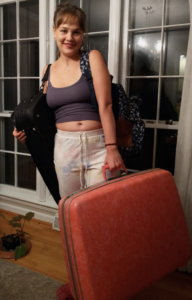 And then, right on cue, I was notified that I was a Global Gap Year finalist! Of course I had no idea what this meant at first, but as I learned more, the idea of a gap year became increasingly exciting. I was thrilled to be accepted. I met new people, gained knowledge, friends, and a wonderful support group for before, during and after my gap year. With their help I feel ready to begin my adventures!

I have been going to the same school- Emerson Waldorf- for 16 years. I loved my time there, but it was a tiny community. My graduating class was 14 people, many of whom I have known since nursery or kindergarten. After spending nearly my whole life with the same group of people I am more than ready to leave my comfort zone and make as many new connections as possible.

Now, I am off to upstate New York for my first placement, with tentative thoughts of Puerto Rico as a second and then who knows, maybe a train tour of Europe! I can feel the symptoms of Peter Pan Syndrome diminishing quickly as I realize how much I have to look forward to this year, and in all the years that will make up my newly-started adult life.