The first half of my gap year was spent at home in Raleigh, NC, and my first placement was around 6 minutes driving distance from my house at the Habitat for Humanity Raleigh ReStore. I had driven by the ReStore hundreds of times and originally wondered if my work with them would feel too familiar, but I faced new challenges that brought excitement and mystery to each day. My official title was “independent project intern,” but I spent a lot of time working with the volunteer coordinator at the ReStore, Anne, to create plans to build a mission wall. During the brainstorming phase, we floated different options for its design, but the general idea for the wall was to have a set of doors at the front of the ReStore to demonstrate the relationship between shoppers’ dollars spent and Habitat’s global mission. Habitat for Humanity of Wake County partners with three countries, Cambodia, Malawi and Honduras, so we decided that each door could highlight one country. It was my job to create the final design and put all of the pieces together.

I didn’t have much prior construction experience, although my dad grew up working on construction projects with his dad and stepped in occasionally when I needed an extra hand. Other than that, I was left alone to figure out what and how much to cut and nail to create a presentable structure. Anne suggested including 3D elements from products already in the store, like using PVC pipes to create flag poles. The final product used PVC pipe, painted vinyl siding to represent flags, door knobs, and yard signs that I cut to display the number of homes built in each country. Around a month into constructing the mission wall, I reached out to my former art teacher from high school to see if the art club would want to be involved in a Habitat project. In fall they began plans to paint a mural for the ReStore, and I’m sure that the next time I go in I’ll be able to see their progress. Building the mission wall satisfied my urge to make art, and challenged me to solve problems that couldn’t be fixed by just painting another layer over my mistake (except for when I started painting the vinyl siding). The project also became much more collaborative than I originally anticipated, and I loved getting to build new relationships with Habitat staff whenever I made trips to the store. I finally finished and installed the mission wall in early December, and had a proud moment when we stepped back after putting it up. Customers paused their shopping to look closer, and members of staff voiced their appreciation. I was able to see the tangible product of the impact that Anne and I had made, and I left my placement with Habitat feeling more equipped to answer challenges with “how can I do it?” instead of “I can’t.” 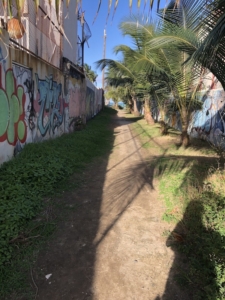 My second placement was fully remote, and it was with VolunteerNC, short for the NC Commission on Volunteerism and Community Service. VolunteerNC is an organization based in the NC governor’s office which oversees programs such as the Governor’s Page program, Volunteer Service Awards, state Americorps programs, disaster relief, and other statewide volunteer efforts. This placement began at the end of September, and at first I struggled to balance my work with Habitat with my new remote role. But I started to chunk out times to do work with each organization and soon fell into a routine: VolunteerNC in the morning, Habitat in the afternoon.

It was through working with VolunteerNC that I was able to really get a sense of the efforts that go into running a functioning volunteer organization. I participated in weekly staff calls and was surrounded by passionate, hardworking people who made me feel included and heard despite me being the youngest and most inexperienced. The person who I worked most closely with was Colleen, who provides state Americorps program support and volunteer support, and facilitates related volunteer projects and grants. Colleen became my mentor and supervisor. I asked her for professional advice and she was able to relate to my struggles and provide a trusted perspective. My placement with VolunteerNC gave me a peek into the professional world, and I learned how to draft templates, organize virtual events, and approach potential partners. The most challenging part of my placement was when Colleen left for a two-week vacation and we had a last-minute event planned for that time. I had to push myself to reach out for help and effectively communicate without the added clarity of talking face-to-face. It was stressful, especially because the event was our trial run, but it went smoothly thanks to Colleen’s preparations beforehand and the involvement of two other VolunteerNC staff members. I experienced growth daily during my second placement, and was a little surprised to find the work extremely rewarding even though it was remote. 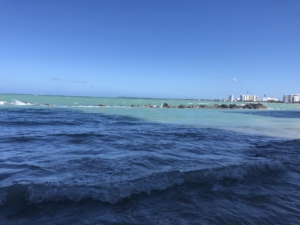 I recently came to San Juan, Puerto Rico, on January 28th, where I have begun my third placement with a nonprofit organization called Causa Local. This placement is in-person with occasional remote working days. Causa Local is a 501 (c)(3) that utilizes the crowdlending platform, Kiva, to provide zero-interest loans to entrepreneurs in Puerto Rico. They have a large network of business owners and entrepreneurs on the island and have made a huge impact since their beginning four years ago. Back in NC, I had been working a few hours each week with Causa Local, and now that I’m here I’m super excited to take on a more involved role. Causa Local is a small organization and I imagine that I’ll do a little bit of everything, but my current responsibilities are to facilitate the Causa Local info email, manage their social media platforms, assist in the set-up of a Pop-up store, and meet with local businesses owners.

I will be working here in San Juan for the next four months, and I know that the experiences that I have here will be incredible and especially valuable for when I’m back at Carolina in the fall. Apart from work experience, however, I am also eager to work towards my Spanish language goals. Because San Juan is the capital of Puerto Rico and a common tourist destination (at least pre-covid), many people here speak both Spanish and English. I hear and read Spanish often due to the nature of my placement, but to actually make strides with my speaking I’m going to have to lead with Spanish in conversation. As an introvert, this will push my comfort a little bit, but I’m certain that it will be worth it. After all, pushing boundaries is what this year is all about.