Adventure is Out There…

Adventure is Out There…

I had been dreaming of moving to Hawaii for my gap year before I had even graduated from High School this spring. After securing independent housing in late October, I finally made the move to Oahu. My placement was volunteering with a nonprofit farm called “Kupa ‘Aina,” which translates to “Indigenous to the land of Hawaii.” As the name suggests, indigenous Hawaiian crops such as Taro leaf varieties and apple bananas are grown on their 5-acre farm. The farm used natural farming techniques, meaning no chemicals were ever sprayed on the crops and the irrigation system was set up to mimic rainfall. I chose to volunteer with the Kupa ‘Aina farm crew because it provided an excellent opportunity for me to learn more about sustainable agriculture and Hawaiian culture simultaneously. The position was amazing because I got to spend all day outside in a beautiful Hawaiian valley surrounded by breathtaking mountains. My experience taught me so much about agriculture management and I learned a great deal about natural farming techniques as well. The service gave me lots of space to reflect and grow personally through my long hours of tranquil weeding and digging. Everyone at the farm made my experience in Oahu that much more incredible through their abundant generosity and support. Oahu is an incredible Island. My housing was located in Kailua on the east side of the island near the farm. I was fortunate enough to spend my afternoons reading or running down Kailua’s breathtaking beach. Not only was my placement exceptional but Oahu’s magic extended to unforgettable weekend adventures. Waterfall hikes, historic sightseeing, lush garden strolls, and attempted surf sessions to name a few. The idea of moving alone to an island where I knew no one had originally frightened me, but embracing this challenge was worth it. During my two months in Oahu, I learned so much about myself and our world. I built valuable skills, expanded my knowledge, and improved my self-confidence. One particularly valuable lesson I learned in Oahu was to stop overthinking and go into things with an open mind because life can find a way to keep surprising you. Oahu’s awe is endless and I never wanted to leave, but talking with a good friend inspired me to explore more of Hawaii’s island archipelago… 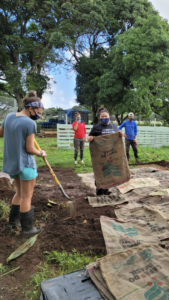 The Big Island is quite different from Oahu. For starters it’s much larger, meaning things are more spread out and there are different climate patterns at different sections of the island and also giant geological features like the world’s largest mountain, an active volcano, and massive reefs. I decided to hop over to the Big Island because my good friend Grace and I found an awesome workstay opportunity in South Kona involving sustainable agriculture on our host family’s property. We planned to only stay for a month but we fell in love with the Big Island lifestyle. When we weren’t gardening we were snorkeling incredible reefs, hiking through lava tubes, surfing, or swimming with dolphins. No matter how many adventures we go on, there is still more to see here. We decided to extend our workstay until late march but cut back on our hours so we can pursue outside volunteer opportunities. I’ve begun training with the Legacy Reef Foundation where I will volunteer weekly to support their coral restoration efforts. I’ve also begun volunteering with Kokua Harvest, a program through the Big Island food bank where volunteers glean excess produce from local properties so fresh produce is included in food bank distributions. I’m really excited about what I am doing here on the big island because it’s allowing me to get involved with many of my areas of interest including conservation and food justice. 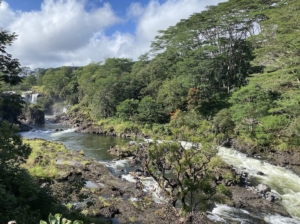 While my gap year thus far is not what I originally had imagined it would look like back before the pandemic, it has still been more amazing and valuable than I could have ever dreamed. Every day I am amassed with overwhelming gratitude because I am able to work with and support such amazing communities and programs here in Hawaii. My gap year thus far has given me the space and perspective to look at my life, my education, and my career from a new perspective as I continue to learn more through the people I meet, the service I do, and the personal reflections I impose. I hope to continue this progress throughout the remainder of my gap year.

By raegeo|February 5th, 2021|Gappers in the Field|