Returning Back to Where It All Began

Returning Back to Where It All Began

I am writing this from the exact spot I began my gap year: on my bed at home in Avon, CT where I will be for at least the next month. However, I am not the same person I was five months ago. I have met dozens of new people, faced new triumphs and failures, visited new places, tried new things, and have faced more uncertainty in my life than ever before.

When I wrote my first blog post, I had just arrived in Wilmington, North Carolina, not knowing a single person and not able to navigate anywhere without my GPS but hoping to “pop the bubble” that I had grown up in. Through the months that I spent in Wilmington, my bubble exploded, personally and professionally.

Mid-September through mid-December, I had the opportunity to work with the organization Vote.org, “the largest 501(c)(3) nonprofit, nonpartisan voting registration and get-out-the-vote (GOTV) technology platform in America.” I was introduced to the concept of “democracy-building” and the idea that it takes constant work to maintain democracy and continue to strengthen democracy. Every day, I got to wake up and know that with every task I completed, I was contributing to a larger overall goal of ensuring all eligible voters had the access and resources they needed to make their voice heard in the upcoming election. That meant every day I woke up excited to be doing work that was affecting people on a national level and contributing to making the US a more just and equitable place.
I was lucky enough to see that work materialize on Election Day when we saw the highest voter turnout that the United States has seen in over 100 years. This is work I could see myself doing for the rest of my life. I had spent time in the past with smaller nonprofits working on things like youth empowerment which I enjoyed, but never had anything that felt so aligned with my interests and goals; never had anything felt so action-oriented and effective in making progress towards such an empowering and important larger goal of protecting and strengthening democracy. 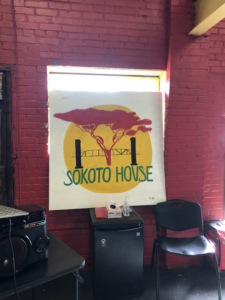 My time in Wilmington also allowed me to connect with an incredible group of community leaders and mentors in the city. The majority of my afternoons were spent at Sokoto House with Lily, Abdullah, and Vance. Lily, Abdullah, and Vance are all incredible local community leaders in Wilmington, constantly looking for ways to support other members of the community and fighting for what is right in the community.

I had the privilege of learning from them as they put together a violence prevention program for the city of Wilmington that they are currently beginning to roll out. This was the first time I had been in a setting where change came directly from community members, not nonprofits or organizations. I learned every time I stepped into that space. I learned about public health and how racism can be addressed through a public health lens. I learned about the most effective ways change can be made within a community by the community itself. I learned the power of collaboration and learned how I could best contribute to these conversations as a white outsider who knew very little personally about the city. Every single day, when I entered Sokoto House I knew I would learn and grow and was inspired by the passion these leaders have for their community.

Leaving Wilmington when I did was hard in relation to this project. It felt like I was leaving something behind that I so strongly believed in and wanted to support in whatever way I could. I am working on what it can mean and look like to support from a distance and am grateful that I found a way to contribute to the community I was living in in a way that felt truly meaningful. Lily, Abdullah, and Vance made up one of the strongest and most collaborative teams I have ever had the chance to witness and each of them carry so much wisdom and knowledge that I am beyond lucky to have had a chance to work and learn beside them.
Outside of Vote.org and my time at Sokoto house, I also built friendships and community in other ways. I tried CrossFit for the first time, finding myself in love with the competition, team environment, and style of exercise. I got excited every day for the dynamic movements, fast pace, and healthy exhaustion that my body got to experience. I also found friends in the gym to explore with and get to know. In my apartment, my roommates became close friends almost instantly. I met their friends and began to build a network of incredible people. 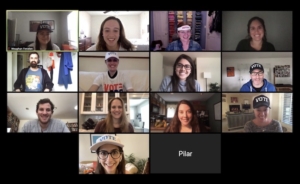 The community I built for myself while in Wilmington, including my Vote.org team, Vance and Lily and Abdullah, CrossFit Inside Out, my roommates, my best friends, and everyone else, is one of the most diverse and most intimate communities I have ever experienced in such a short amount of time. My community was built of people from vastly different backgrounds, perspectives on life, career paths, and held varying interests and passions. I felt so connected to each of them and each of them challenged me to grow in different ways. The community is what made it so hard to leave Wilmington when the time came.
When I finally got home towards the end of December, it felt like my hometown was small. It was as if I was stepping back into that bubble I had grown up in, but this time entering with much more clarity on the complex world beyond it. I had found new career paths that interest me, finding myself incredibly drawn to democracy building and public health, and community-led change. I experienced change-making on both a national and local level in the midst of one of the most polarized elections in our nation’s history. I met people with life experiences incredibly different from mine or that of the people I grew up around. I learned what it means to be a new person entering a space that is not mine and learned how to find my place in that uncertainty.

Although I am not sure exactly how my gap year will move forward, I know that the life experiences I had this fall are ones that will remain with me for the rest of my life and that those alone are enough to have made my gap year everything I imagined and more. I am still processing everything I experienced and how I have personally grown through it all, but I know that I have become a better person and that I am now facing the biggest challenge of my gap year; figuring out what comes next. I have about six months left until I move into Chapel Hill in the fall and am dying to figure out how to best fill that time with exciting adventures and challenges that will continue to make me a better person. I can’t wait to see who I am and how small my bubble will feel after all that I experience in the next 180 days.

By raegeo|February 1st, 2021|Gappers in the Field|