The following post was written by Global Gap Year Fellow Matthew Lu. Matthew is spending the first part of his gap year in Shenzhen, China.

I knew that I’d have some use of this translation tool, so I had the foresight to download the Chinese option before I left. Oh, how fortuitous that was (though technically I could still do it now with my VPN).

It seems that growing up in a Mandarin-speaking family had left me a little overconfident about my language abilities. Of course, I acknowledged that I’d have some troubles in China speaking and understanding, but I had relegated this to a small ditch I’d step over instead of a massive canyon spanned by a tiny bridge held aloft by the aforementioned tool. That’s not to say that I’ve been completely lost. Thankfully, growing up with the language, the grammar (or most of it) flows naturally, something I’m told others often struggle with. No, the main problem is vocabulary. Growing up in a Mandarin household, I of course learned to speak the language, but our daily discussions were of the ordinary sort. No philosophical, political, or earthshattering discussions were held in Mandarin. Anything at all important was said in English. Furthermore, I had grown in the habit of speaking Chinglish, a sort of amalgam of Mandarin and English. Most Chinese people did it- speaking Mandarin while peppering their speech with English. However, it became a crutch for me. As soon as I couldn’t think of a Mandarin phrase or word immediately, its spot was filled with the English correspondent. Of course, this worked in an English-speaking country, but not so much in China. These “holes” in my understanding leer at me as I try to understand what was just said to me. This is accentuated by the fact that my daily life in China has me speaking and listening to discussions in Mandarin magnitudes of complexity greater than what I would speak with my parents about. Add in the fact that Chinese as a whole relies on context for understanding far more than English, and you’ll get me in my current situation: trying to guess what’s being said while understanding about ⅔ of the conversation. Google Translate has been essential to my survival, by allowing me to figure out a word or phrase if I’m struggling too much. Also, I never learned how to read or write Chinese, so without Google Translate I would not only be up the creek without a paddle, but without a canoe, a life-jacket, or the function of my limbs.

I might be writing up a bit too much about my difficulties though. Human nature is far too focused on the one negative instead of the many positives. So I’ll talk about those too. Shenzhen is a gorgeous city. It used to be a poor fishing village until the government reformed it into a Special Economic Zone. This essentially “super-capitalism-ed” it. It’s also the site of one of China’s few victories against Britain in the Opium Wars, who’d have thunked it? As such, the benefits of fast growth along with extremely centralized planning have led to astronomic growth, and much of it has been quite nice to behold. The area where I’m staying, the Futian district, is a hub of tech and finance. Skyscrapers, many of which are architecturally pleasing, stretch to, well, the skies. In addition, the country has a number of amazing landmarks, like the Torii Gate (or the ‘Window of the World’). 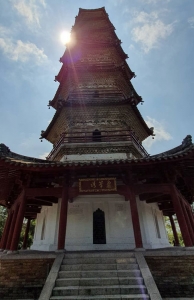 An old tower in Heyuan

My volunteer work has helped me to learn a lot too. Though I have some grievances with the work which have caused me to switch positions (detailed in the next blog post because let’s focus on the positives for now), it has allowed me to learn a lot. For two weeks, I accompanied volunteers to a small village called Baipuzhin. These elderly volunteers helped out in the community, often taking the form of doctors volunteering at a hospital and going into the village to treat patients. Here, I noticed an interesting trait: Chinese medical school includes Traditional Chinese Medicine in its curriculum. This should’ve been obvious to me, given that my mom was a former doctor in China, but I had assumed she went to a special school. It seems that it truly is integrated into the curriculum in China. I’m a huge proponent of the integration of traditional Eastern and Western medicines being utilized in concurrence, but that’s a debate for another time. All you need to know is that I was surprised that heating the area where acupuncture needles pushed into the skin was part of routine therapy, after which the patient was prescribed drugs.

Our group also included retired teachers that went to the local elementary school to assist there. There was a combined math/reading teacher as well as a phys-ed teacher. Being a poorer rural school, they had no dedicated phys-ed teacher, rather it seemed one of the other teachers shouldered the burden. The phys-ed teacher was an instant hit (with the boys at least, the girls seemed more reluctant to participate). It got to the point where he began to set up a basketball team for the boys.

Finally, there was a business leader, who worked with the Communist party office to try to revitalize the community. This I cannot provide as much detail on, as it involved more papers in the office type volunteering, something, unfortunately, I cannot read. Another one of my jobs was as a photographer, and there are only so many ways you can take a picture of a man pushing papers. Yet it is in my mind that this was probably one of the most important positions, as this was probably the one most likely to leave sustainable change in the community.

Upon my return, I continued to volunteer in the secretarial office of the organization. Here, I spent my days doing whatever was necessary to help. Since I was not a permanent fixture in the office, I was not able to handle any important matters as these were all long-term. I dealt mostly with errands, photocopying what was needed, grabbing things from the mailbox, and helping the other secretaries with whatever jobs they had to do.

On weekends I would explore the city, doing the typical “touristy” type things. Shenzhen, however, wasn’t exactly designed with tourism in mind. Sure, there were things to do, but Shenzhen had always been more of a city designed for business and work. I went to all the places I could think of to go, and still do, but it is true there isn’t as much history as, say, Beijing or Shanghai. Still, Shenzhen is quite an amazing city to volunteer in, and a beautiful one at that. In lieu of me being able to write a better conclusion, this is where my post must end. Until the next one, I suppose.

An art installation in Shenzhen

By Keara Mclean|November 25th, 2019|Gappers in the Field|