The Night Is Young

The Night Is Young

I’ve been in Cairo and away from Cape Town, my first “home away from home,” for just shy of two weeks now. Life is MOVING. Everything is happening so fast. This blog post is my attempt at unpacking what was an incredibly formative, fulfilling and intense first leg of my gap year experience; wish me luck! 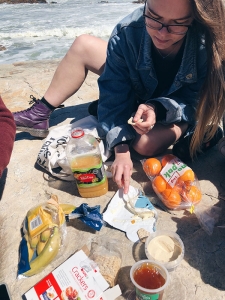 Cape Town was, simply put, a dream. During my first weekend there, I spontaneously joined a fellow intern and a few of her friends on a road trip to the West Coast National Park. I was overwhelmed by a feeling of absolute serenity as we sat atop a massive boulder towards the end of our afternoon, munching on clementines and laughing like we’d known each other for years. My biggest pre-gap year concern was a fear of loneliness, and there were several moments on that trip where I felt like someone was tapping me on the shoulder and telling me to let those worries go, and for good reason! Those fellow adventurers ended up becoming some of my closest friends, and I don’t think my experience would’ve been a fraction of what it was without their influence.

On a separate note, I was warned against falling into the trap of “destination happiness” – the notion that changing one’s physical location will spark an intense positive transition in terms of joy and overall life satisfaction. What I wasn’t warned against, however, is the falseness behind the notion of “destination productivity.” This could have something to do with how “destination productivity” is a term I just came up with, but when picturing my gap year, I imagined that I’d be on a constant and unyielding grind. I would make time to write blog posts and journals, witty reflection pieces and columns for The Daily Tar Heel, all while crushing it at my internship, maintaining meaningful long-distance relationships, and seamlessly building a sense of community and belonging with those around me – nothin’ to it!

In my defense – some of these things, I did! I found so much joy and fulfillment at my internship. Throughout my time in Cape Town, I constantly reflected on how invigorating it felt to be in an environment where everyone around me was passionate about the work they do. I wanted to go the extra mile, not out of a sense of obligation, but because I was rooted in a community and driven by a mission that made me feel.

For those of you reading this who aren’t my mom, I spent the first three months of my gap year as a communications intern at Scalabrini, a refugee and migrant center in Cape Town. I interviewed clients and wrote their success stories, documented day-to-day activities put on by the organization’s different platforms, and facilitated a bi-weekly digital literacy class for a group of middle-aged students. One of my final assignments was to interview the director of the organization for an end-of-year reflection piece, and the quote that stuck out to me most was when she said, “We have the same resources as a corporation, the same level of commitment as a corporation, but our goal isn’t profit. Our goal is change.” It’s this combination of genuine selflessness and drive that made me want to maximize my impact and truly earn my position at Scalabrini. In terms of relationships, I also feel so incredibly lucky to have found my people – my Muslim neighbors who adopted me and had me over for dinner twice a week; my ever-enthusiastic and immensely accommodating roommate; the friends who make me laugh and cry and think and took me to spots around the city that I would’ve never found on my own. On the flip side, though, I must admit that I was inconsistent in keeping in touch with my people back home. I chalked it up to the time difference, but it was more than that. It was the pit I kept falling into where I hadn’t called in too long, and then I would want to call but would have to rationalize why I took so long and I didn’t really have an excuse so I just wouldn’t, and then the pit would deepen…you get it. I also wish I’d written more. One of the reasons I was so keen (they say keen here – leave me alone) to take this time away from school was that I’d finally have time to write consistently! And although I do finally have the time, I think I’ve lacked the courage. I know it sounds dramatic, but writing can be intimidating. People might…god forbid…read my work. And I want to feel like my reflections are meaningful and well-articulated, but every time I sat down with a thought to unpack, I felt like something was missing, or that it wasn’t profound enough, which ultimately meant that I neither released mediocrity or perfection.

I came to Cape Town seeking a sense of confidence and peace, hoping to slow down the pressure and the pace of my life. Looking back at that chapter, there are things I’ve crushed and things I have yet to crush, but the metaphorical night is young! Excited for all that awaits and thankful for all that has passed.