My head pops out of a 1920s Greco-Turkish War military bunker atop a cliff side on the Greek island of Lesbos. It’s 35 degrees and the wind off the waves of the Aegean in front of me chills to the bone. Armed with a thermal imaging scope I scan the water. The mountains of Turkey tower just above the horizon. I see a coast guard ship, a freighter, a ferry, but not what I’m looking for. No dinghies tonight. Not yet.

Dinghies are the small plastic inflatable rafts with motors haphazardly secured to them that carry 30-50 crammed people across freezing water in the dead of night.

It is about as safe as it sounds. 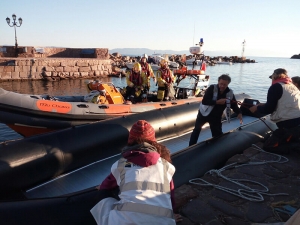 Part of my work here is to spot dinghies that have made it into Greek waters. I make sure they are not capsizing and notify the rescue boat crew and coast guard so they can ensure they arrive safely. The system of spotters works round the clock uniting different non-governmental organizations with the common goal of keeping people safe. For me, this means I spend a lot of time listening to podcasts, sleeping on cold leather car seats, staring at the sea, and contemplating borders.

The Greek border, the border of the Eastern European Union, is two nautical miles in front of me. So is Turkey. In high definition, its mountains and valleys captivate my field of vision.

During my time here, I was planning to hop on the ferry and travel to Turkey. However, just one week after arriving, the Trump administration announced it would stop issuing visas to Turkish citizens and Turkey responded with a visa freeze of their own.

Suddenly, my travel was restricted in a way I’d never come so tangibly face to face with, and, to be honest, it felt very silly. Turkey is right there. I’m spending hours looking at it. I’m a good person who has good intentions and I can’t visit because of political posturing.

I didn’t understand how arbitrary borders felt until one stood right in front of me and said “No, not you.”

Now I imagine that feeling is a million times a stronger for those who have a strong motivation to leave their current country, such as war, violence, famine, poverty, or opportunity existing just over a border. Imagine how ridiculous that border would feel and how frustrating it would be. After all, it’s just an invisible line.

I can see how this five-mile stretch of sea would seem like nothing if there was a chance for something safe and better on the other side.

As the Trump administration attempts to legitimize its invisible line by raising a wall, it feels almost frivolous.

From where I sit, borders seem to be lines drawn in the sand, washed away as waves push and pull boats of tired people across.

By Kaitlin Galindo|January 2nd, 2018|Gappers in the Field|