I was supposed to be in Shanghai for just a week. I was going to be there for a nice seven-day trip to see and experience the city, and then I would fly to Hong Kong to start my service work.

I have learned that things sometimes don’t work out. It doesn’t matter how much you plan. For me, that has always been a difficult concept to grasp. I am a Type A person; I like to plan and be in control of my life and its happenings all the time. Spontaneity has been a stranger to me. Until now.

Within 48 hours (three days before I was supposed to leave for Hong Kong) every single placement that I had for the year fell through. My entire itinerary disappeared, leaving me with nothing. It was utter chaos. I felt as though I was living in the nightmare sequence from Hitchcock’s Vertigo.  Hermann’s despaired score had become the soundtrack to my life. My entire world was spinning out of control, and I was spiraling into disaster.

I didn’t know what to do. I was 12 hours ahead of everyone back home, which meant that my day was over before theirs began. I was losing time before anyone else, and I needed to find something soon. I was angry, frustrated, and I felt betrayed. I thought I had failed.

That was not the case. 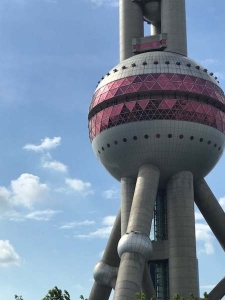 Fortunately, accommodation arrangements in Shanghai fell into place. I bought myself more time. I decided to look for placements throughout all of Asia instead of just China. Within a day, I was graced with a myriad of options. Things were looking up.

I decided that I was going to India. India is a country that has always been of great fascination to me, but I had no plan to go there this year. However, I now realize that it’s meant to be, and I’m thrilled to seek new opportunities there.

After an unexpected two-week delay in Shanghai, I am happy to say that I have been in Guangzhou for the past week. Just as everything else with my year, this city was not somewhere I had anticipated to go to. But I’m certainly not disappointed to experience a different city and culture within China. Currently waiting to get my Indian visa approved, I might even find myself exploring Hong Kong and Singapore. Only time will tell.

Within my eighteen years of existence, I have been able to master the act of wallowing in self-pity. However, I found that it is utterly useless in this time of fear and uncertainty. This unexpected pit stop has taught me not to dwell on the negative, but rather to see things through rose-colored glasses. Instead of thinking of being stranded in Shanghai, I thought about the wonderful opportunity I was handed to stay in a place I have always wanted to visit. Just a simple change in semantics allowed things to become better.

One desire I had for my gap year was to learn to go with the flow. I knew that my entire life thus far had been structured with an inhibited mentality, and I was tired of it. I remember wanting an adventure where I allowed myself to be spontaneous and intrepid. These first few weeks have undoubtedly given me that chance. And I am grateful for it.