More Than Just a Kodak Moment

More Than Just a Kodak Moment

From the beginning my mother never liked the idea of me travelling to Madagascar. I didn’t know anyone there, didn’t know what I was going to be doing, and picked out my hostel at the last minute. It was a complete, all-in adventure. She was relieved when I told her fellow Gapper MaryBeth decided to join me a few weeks before leaving. Like El Salvador, I wanted to create a life in the area rather than try to visit every possible tourist attraction. At the hostel we stayed in we met many foreign travelers who were confused as to why we were staying in Antananarivo for four weeks. Somehow they felt they “could barely last two days in this boring city.” So far, we were having a great time making friends and tagging along for typical Malagasy activities.

“Be careful” they said. “Don’t befriend the locals” they said, “you will end up unintentionally married into a Malagasy family.” Did we listen to them? Of course not. For the tourists, visiting Madagascar was about jumping from place to place in order to see many unique wonders of an unfamiliar place, while having as little interaction as possible with the local people. For me, the people are the most valuable aspect of any country I travel to. For me, the people are more than just a Kodak moment. 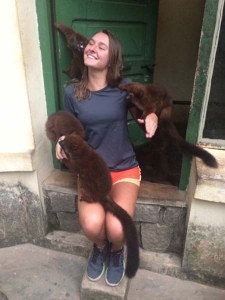 Some said that it’s better to avoid befriending locals because they will show you around and then expect payment in return. Although this may be true on occasion, it implies that making local friends is unlikely. MaryBeth and I found these assertions to be false. Finding young people who spoke English was fairly easy: we asked people for directions, we gave people compliments, and we spent time in places that were popular for other young people to go. Basically, we made friends in Madagascar just like we would in the US. In many cases we did not have to stress about starting a conversation with someone, because we were often overwhelmed with thoughts and questions from others.

One friend quickly became two friends, two friends became ten and so on. There were some cultural differences but not enough to deter two open-minded students from UNC-Chapel Hill. Our friends spoke English, but many of them had only learned from a Malagasy teacher with limited resources so there was still a language barrier.

But there was one thing that never failed to break the barrier and diffuse the multiple souls of different cultures into one heart: music. Even MaryBeth and I face many cultural differences, but with our love of music we were able to feed off of one another’s abilities and musical perspectives and experiences. We were able to connect in the same way with our friends from Madagascar. When I first arrived in Madagascar, I was immediately attracted to the local language (Malagasy) and gained even more of an interest as I listened to the Malagasy music. I was even able to determine the meanings of certain words by constantly being exposed to the Malagasy music videos (and the language in general). When Marybeth and I attended church with a friend, we still felt moved by the spirit when worshiping through songs of another language which not only strengthened our faith individually but allowed us to connect further within a community of people who felt culturally different from us. Music became one of the most powerful tools for breaking language barriers. My friend’s family also happened to be musically talented both instrumentally and vocally and his brother, and sister-in-law were all familiar with many popular English songs. When we all sat in the living room together Mary Beth and I were not able to share much conversation with the family unless someone translated. But when we started to play music together, the conversation was endless. Piano, guitar, ukulele, and voices came together in a colorful conversation of English, Malagasy, and French songs. Sometimes as a group, we went to karaoke bars. No matter how well we sang, the locals seemed to really enjoy watching foreigners sing familiar English songs. Some of the karaoke participants even took videos of our performances. Music is truly a world language. Different types of music can move people in different ways but usually you can find some connection within the music that will bring those different people together. If Marybeth and I had not met so many local friends, our experience would not have been the adventure that it was. I received the four weeks of immersion that I was hoping for, and for the next few weeks all of my favorite Malagasy songs were left on replay inside my head. Unfortunately, some of our European friends did not enjoy their experience as much as they were expecting, but I think they would be happy to know that we did not get married into a Malagasy family.