Visiting the DLZ Center for Asylum Seekers was the most valuable experience I have had here, and it almost didn’t happen. When I arrived in the morning ready to spend the day with the 60 people who live in the hostel-style building, the boss told me that there had been a mistake and that today wasn’t actually a good day for me to visit because they were very busy.  Did I just take no for an answer and go home? No! That’s been one of the main things that I have learned during my gap year; not to just give in, but to push and try and find other options. I asked if I could just sit in the common room and talk to people, completely staying out of their hair. She agreed and I settled into my spot on the couch smiling at everyone and nodding a greeting to everyone who came by. Like I have seen in a couple other centers, the TV was playing really inappropriate sexual pop music videos from the States, which is always slightly awkward when you are trying to have a conversation with someone and with little children running around. Soon a few curious people sitting on the couches asked what I was doing there, since they aren’t used to having local people come visit. Once I explained that I was from America but that I was living with my grandparents in Switzerland, they were even more surprised. An Ethiopian woman offered to give me a tour around the center and showed me her room, which she shared with two other people. It’s hard to imagine that three grown women still have to call the top bunk (or in this case probably the bottom bunk) like we did when we were children. 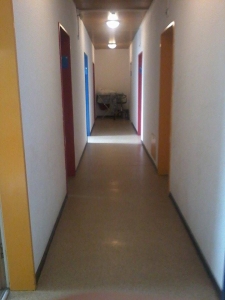 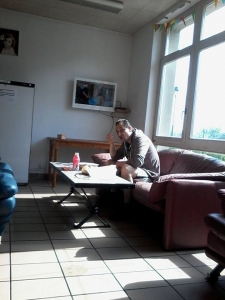 There were quite a few people there from Africa and they were all so pleased to hear that I was going to Rwanda. This one man kept telling me how much I will love it and I will never want to leave. He told me that when I finally leave, I will have a huge family with six children with me. Everyone sitting around just chucked at him. We also had discussions about everything from the sentiment that women need to take over power in Africa, to how terrible he thinks it was that Obama killed Kaddafi, to how he hates that everyone in America lives in racial and ethnic ghettos as opposed to all living together. It was very fascinating. I played fuss-ball with two young brothers from Syria and another woman, but I was clearly dragging my team down and the poor boy was noticeably frustrated with my lack of skills. 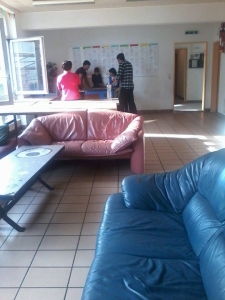 The day unfolded like that; I moved from one group of people to another and we talked about all kinds of things. I even got up the courage to greet the North Korean refugee in Korean completely shocking and delighting him. It was the first time I had ever actually spoken to someone and it was interesting to see how much I had actually from listening to Korean music and watching a few Korean tv shows with my friends. He is one of only six North Koreans in Switzerland, but I didn’t have the opportunity to ask how he fled. At lunchtime, when everyone started cooking, an Egyptian man announced that he was going to make me lunch and wasn’t swayed when I repeatedly insisted I had brought a sandwich and he didn’t have to. When dinner came around, I was invited to eat with a family who had fled Syria four months ago. I am now friends with their 19 year old daughter and we plan on keeping in touch over Facebook since her English was almost perfect. At the end of the day my brain was so tired from speaking five different languages (I didn’t even know that I could communicate in five languages!) and keeping track of who spoke which language. 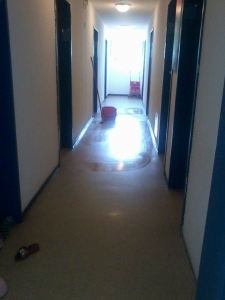 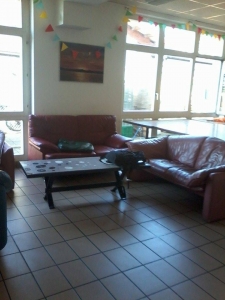 The general message that I took home with me from my very fascinating, special day was that expressed the same sentiment that they are generally not very happy in Switzerland. Not only is the system here very challenging and arduous and stressful, but this country is very close-minded and unaccepting when it comes to foreigners. They feel extremely ostracized by the Swiss population and they seem to know that they will never be considered “Swiss” no matter how long they live here and how good their German is. This made me really appreciate the American value that anyone can be “American” and that we more readily accept people into our “melting pot”, as cliché as that sounds. The life of an immigrant in the States is by no means easy, but overall they are at least accepted as a legitimate part of our society. Unfortunately, I can not say the same for Switzerland.