The 6 other 2014-2015 Global Gap Year Fellows and I just spent a packed weekend at the UNC Campus Y, where we jumped head-first into the alarming but exciting sea of planning that is preparation for our years of service abroad. In addition to getting to know each other and our hosts, attending a concert of the famed Mipso Trio, and feasting on Panera, Moe’s, and some awesome Thai catering, we skyped with fellows who are currently abroad and took in the wisdom of the ones who are currently at UNC. We also tried to absorb as many travel tips as possible– it’s a big world out there, and so are the binders of information that Jakelin guided us through!

Certainly one of the best parts of orientation was meeting my fellow fellows, past and current. The prevalent feeling of the weekend was this sense of wonder and good fortune that I was going to be a part of such an incredible community. I was surrounded by hilarious people full of endless global experiences; I think myself and the other new members of the GGY community were at least a little amazed that this was what we had gotten ourselves into. 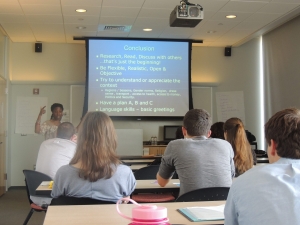 “So what do you want to do next year?”

During orientation, this was the question of the hour (besides chacos vs. birkenstocks). It is a question that I have been thinking about for a long time, but I still didn’t know what to say. People started asking us what our plans were for our gap years as soon as we arrived, and I kept telling them to ask me in a few days, because I didn’t know what my plans were yet but hoped to find out over the weekend.

“I’m not sure but I will know a lot more after orientation!”

This was my go-to answer ever since accepting the fellowship and filling people in on my newly nonconventional college plans. I was having a hard time figuring out how in the world to make the most of this opportunity (literally), so I pushed off my confusion and postponed it to April 4th: the date of orientation and my allegedly impending clarity. However, things didn’t go as planned.

The majority of our time was spent talking about general gap year prepared-ness issues: packing, safety, budget components, etc. We had some time to start thinking about the specifics of our personal plans, but I didn’t really know what to make of our allotted research time. No one planned my gap year for me, and only after the weekend was over did I realize that a part of me had kind of been expecting someone to. In terms of my definite plans for my gap year, I concluded the weekend five times more confused than I was before. I needed to reconsider whether I wanted to participate in a group program, the places I wanted to visit, how long I wanted to be gone, and the service I wanted to do after hearing so many new insights from those involved in the program. By the end of the weekend, “stressed” was my answer when asked to sum up my feelings in 1 word, and it was certainly an accurate response. However, after getting home and regaining my energy (read: sleeping for 24 hours), I realized that the better answer would have been “inspired”. Yes, the work ahead is daunting and certainly stressful, but orientation weekend also made it more apparent than ever that all of the stress is in preparation for one of the greatest adventures of our lives. 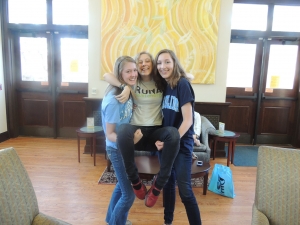 We love our mentor! Emily Gabbard, Carrie Hamilton, and myself

So overall, the weekend eliminated a lot of my doubts, just not the ones I had anticipated. Orientation didn’t meet my expectation of immediate gap year clarity, but it left me feeling more confident in my choice of the fellowship and of UNC than I thought possible. I left tired and inspired and full of the desire to forge ahead with my plans and make sense of all that I learned; I am ready to take on the formidable task of preparing for a year in global service and thankful that I get to do so.  I am endlessly grateful to be a part of GGY and the Campus Y, thank you so much to the fellowship program and everyone involved for a great orientation weekend! 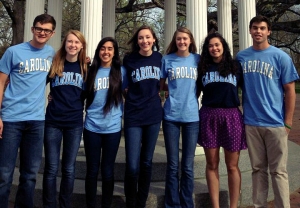