Forgot My Dancing Shoes But Found a Family

Forgot My Dancing Shoes But Found a Family

“You haven’t heard of Mipso! You are from Chapel Hill and you haven’t heard of Mipso! You are kidding, right?” In the sphere of UNC it must be a very serious crime not to know about the Chapel Hill born bluegrass/country band, because the number of shocked responses I got when I confessed at a Mipso concert Friday night I had never heard Mipso was astounding.

It was only the first night of orientation, and by the time we were at the concert it had been a very long and eventful day. Richard, the head of the Campus-Y, had invited many people associated with the Campus-Y, Global Gap Year Fellowship, and UNC admissions to dinner. As I met people at dinner, and as I was in the throes of my introduction speech I was struck by a thought: this is my new family. It was a momentous occasion: realizing that the people around me will support and help me in any way they can, and knowing that during my time at UNC when I falter or need help, I have a group of people that I can lean on. 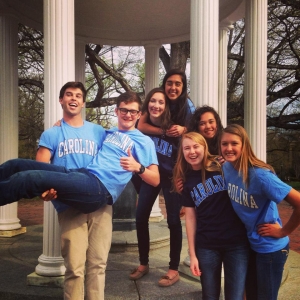 The support followed to the concert as each one of the fellows, including me, attempted to dance to bluegrass music. Not really knowing how, and failing to copy the others’ “moves”, I settled for rocking back in forth on to my toes and off.

Huge mistake. However by the time I figured that out, it was the next morning and my calves were incredibly sore, cramping up from over-exertion. I realized that what I had thought to be the way to dance to bluegrass was really a night of calf raises. I had been doing a leg workout for 2+ hours. However, if anyone noticed my slight limp, they didn’t mention it. 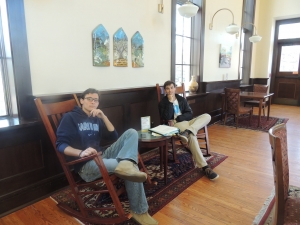 Keegan and I relaxing.

Saturday was one of the first days I got to sit down with my mentor, Keegan, and work to make the plan I had for my gap year viable. Keegan helped me tremendously, and after our one on one session Keegan and I came up with a working draft for my gap year. My plan is to start my gap year this summer by first taking a class in the US on how to implement solar panels and solar energy systems. For the rest of the summer I will work in a Spanish speaking nation in either Central or South America, and most likely in Nicaragua. From August to June of next year I will stay in China, doing service work in either sustainable energy or educational systems, while practicing my Chinese. The last part of my trip will be spent in Kenya working with an upcoming Chapel Hill born organization called United Solar Initiative (USI), which implements solar energy systems in rural communities around the world. I will be working with USI in conjunction with Carolina for Kibera, another UNC-born organization, installing solar panels on to the clinics, hospitals, and other buildings CFK has built in Kibera.

Throughout my high school career I have studied global poverty, reading authors such as Paul Collier, Esther Duflo, and Dean Karlan. In my studies I have strove to find the area of poverty that has the largest ripple effect, meaning that if I can alleviate one issue it will diminish the prevalence of other problems in a poverty stricken community. I have worked with USI and I plan to use my gap year to do service work in the field of renewable energy because I think that cheap, reliable, and accessible energy is the key to eliminating the scourge of poverty. That is what I believe, and I am very grateful for the opportunity to pursue that belief. 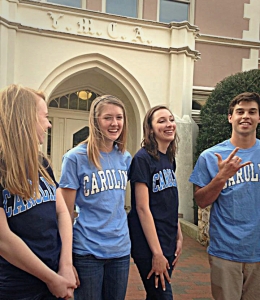