Boarding the plane at O’Hare, it would be a blatant lie to say that the only emotion coursing through my veins was excitement. Of course I was excited–I could still remember getting the phone call telling me that I had been awarded the Global Gap Year Fellowship, and with it, the notion that my dreams of taking a gap year were suddenly very real! But now, along with that excitement came anxiety, self-doubt, and the realization that stepping onto this plane would mark a transition in my life, a beginning and an end. With conflicted emotions, I stepped onto the plane, knowing that I was headed towards Orientation Weekend to plan a once-in-a-lifetime adventure, but not knowing at all what that would entail.

The people I met at the GGYF Orientation were definitely the highlight of the weekend for me. When I arrived on campus (the first time I’d ever seen UNC–it was beautiful, and the weather was absolutely perfect!), I was immediately introduced to the six other 2014-2015 Global Gap Year Fellows. We were whisked over to Richard Harrill’s house, the director of Campus Y, and there I was able to talk to the other Gappers for the first time. Those who had already taken their Gap years made themselves readily available as a resource, inspiring us Fellows to plan our own. Each of my fellow Fellows had very unique ideas of what they were hoping to accomplish, but we all realized that we shared the desire to explore the world and learn from our experiences. Already, the weekend had become so much more than I expected it to be–it wasn’t just a lecture, it was a conversation that we were all a part of, to learn what we wanted and needed to learn. The independence and initiative asked of us gave me a taste of what I should expect for the coming year. 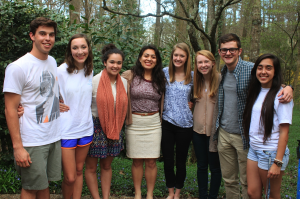 My Fellow 2014-2015 Gappers and myself (with Jakelin!) after dinner at Richard’s house. In order from left to right: Lee, Kaitlin, Bella, Jakelin, Emily, me, Thomas, Gaby.

The second day, we attended Go! Global Orientation, a seminar that creates awareness for how to interact with different cultures with respect and humility. This session was an eye-opener for me: so many things I’d never considered were brought up, like how we as volunteers are there to contribute to, and not take over, service projects. This much-needed and realistic perspective was supplemented nicely by our following activity: actually planning our individual Gap years.

Back at Campus Y, the seven of us Fellows got out our laptops and began to research. We had so many resources, including each other, previous Gappers, Richard and Jakelin, and of course, the internet. By the end of the weekend, I was interested in using my skills in knitting and crocheting to work with a women’s empowerment group in Peru, doing a WWOOF Project in Italy, and working in a medical clinic in Africa.

Back at Raleigh-Durham airport, about to leave Chapel Hill for Chicago, I realized that I was walking a little taller, hesitantly confident in my plans for the coming year and absolutely ecstatic about getting to continue to work with such incredible people on service projects tailored to my exact interests. Seriously, who gets to do that?! Of course I’m still scared about everything ending and changing, but that weekend provided me with a great foundation upon which I can begin this next chapter of my life; so yes, a lot is ending to make way for new beginnings, but a lot is just beginning in itself. 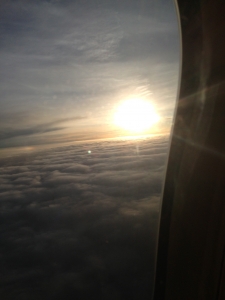 I had to take a picture of this beautiful sunset I saw on my plane from Chapel Hill back to Chicago.