At the beginning of March, I left Thailand for Cambodia. My two month tourist visa was close to expiration, so I had to buy another one. The first five days of my vacation I spent in Phnom Penh, the capital of Cambodia. Riding across the city in a taxi, I was scared for my life. Let me just say that I previously thought my experience with roads in Lebanon was uncomparable to any other country, but Phnom Penh proved me wrong. People were turning a two lane road into three lanes. But then you have to add three more imaginary, non-existent lanes for the motorbikes and tuk-tuks whizzing between cars.

Although it’s Cambodia’s biggest city, Phnom Penh has more of a big town feel with its lack of skyscrapers and compactness usually found in a city’s center. As a lone traveler, I wanted to tag along with some other backpackers to make my stay more enjoyable. I ended up spending my whole time in Phnom Penh with four Germans, two of whom were a year older than me. Throughout the week, I toured the king’s overly lavish royal palace, took many walks down Sisowath Quay, a beautiful street running parallel to the Mekong River. Between the street and the river runs a grassy, family-friendly strip dotted with evenly spaced out palm trees and flags of various countries around the world. It’s one of my favorite streets in the world! Phnom Penh also has a lot of rich history, both good and bad, to offer, especially about the infamous Khmer Rouge and Cambodian genocide. Before coming to Cambodia, I had only heard of this regime. But it was through visiting the Killing Fields (execution site of victims of the Khmer Rouge) and S21 prison (torture prison) and hearing true accounts from victims of the genocide that I became aware of what the Khmer Rouge actually was.  I could write a whole blog about the Khmer Rouge, but I’ll refrain from doing so. I encourage you to research it if you don’t know much about it. 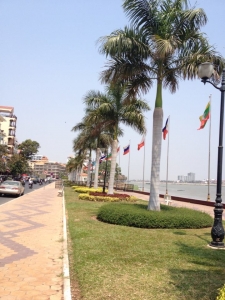 After five days in Phnom Penh (the amount of time it took for me to receive my visa), I could feel the pull of Angkor Wat’s majic getting stronger. I arrived in Siem Reap, the town closest to Angkor, after an overnight bus ride; by noon that day, I was walking on the 900 year-old stones. It was a beautiful sight. The two grand ponds in front of the entrance juxtaposing the short, dry grass surrounding the temple. The intricate and meticulous inscriptions on stone and the sheer size of the temple. But there’s more to Angkor than just Angkor Wat. I came to Siem Reap with one of the Germans I met in Phnom Penh, and we spent two days in Angkor. The last day, we completed a 20-something kilometer loop on bicycle under the hot, baking sun and explored around ten more temples. Unfortunately, I was sick with food poisoning, so the day was pretty torturous and I was all templed out by the end. We did wake-up at 5 am that day to catch the sunrise at Angkor Wat, and that was well worth it. 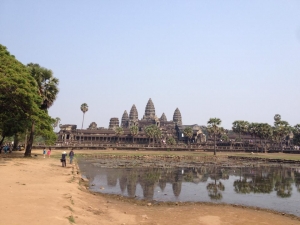