An update from Pai

An update from Pai

Not much has changed here in Pai other than the weather beginning to warm up and the air quality decreasing. It gets as hot as 97 degrees during the day as we’re entering hot season. And just to add a nice touch to the already gross, sticky sweat on your skin, rice farmers are beginning to burn their fields in order to prepare for the next planting season. The burnings are just beginning, but at their peak in April, the valley fills up with smoke and air quality becomes very unhealthy. Looks like I’ll have to wear a mask as the locals do.

This past Thursday was my last day of teaching after-school English. The student’s summer break from Thai school begins in mid-March and goes to early May, so we made some new plans here at the BRP. We are going to run a summer camp, which I’m very excited about! Most of the kids normally spend their summers either accompanying their parents to work or left alone at home all day to watch TV. The camp wil include a continuation of English language learning so as not to forget everything learned in the after-school program, Shan literacy classes so the students can learn to read and write in their native tongue, and daily activities including sports, music, science, experiments, and arts and crafts. 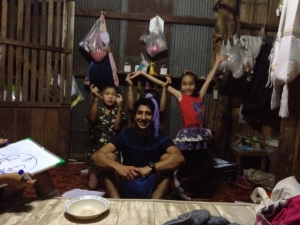 Goofing around with the kids after a lesson. One of them put a yarn octopus on my head.

Outside of my work life in Pai, I have recently gotten involved in Muay Thai, a stand-up kick boxing type of martial art that originated in Thailand. I used to do Tae Kwon Do for about nine years which is also stand-up fighting, but the two martial art practices are not as similar as I expected for being both stand-up style. I usually attend two to four Muay Thai classes a week depending on my days off, and each class is two hours, and extremely intense. Every training session involves pad work to practice kicking, punching, elbow, and knee techniques, and crazy ab workouts at the end. Some days are dedicated to fighting in the ring, and yes, there is contact, so you better keep your hands up! On Wednesdays, we run from the Muay Thai camp in the northwest part of town to Mae Yen temple on top of a mountain, just outside the southeastern part of town. Once at the entrance to the temple, we run up and down the steps on the mountain twice, which is when I usually hate my life. Then, we run back to the camp, concluding the seven kilometer run, not including the steps. Muay Thai is a way for me to get involved in the community, stay in shape, and learn some cool new moves. Also, in my free time, I practice speaking, writing, and reading Thai. There are 44 cosnonants, 24 vowels, and five tones in the Thai script, so learning how to read and write is not an easy task, but I love the challenge. My self-studies have somewhat paid off as I can successfully order at a restaurant in Thai! 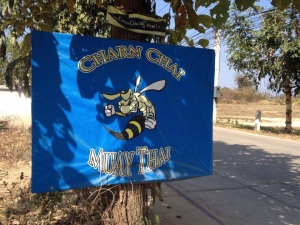 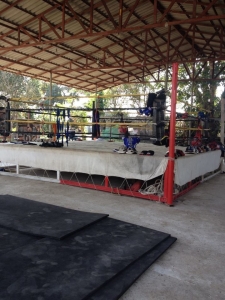 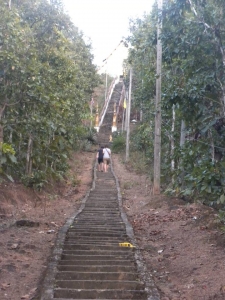 Stairs we run up on our seven kilometer run

That’s about it. My next blog post will be about my one week vacation/visa renewal trip to Cambodia which starts this coming Sunday. As usual, thank you for reading!