One of my service projects through the Fulbright Foundation in Colombia was to work with a local high school student as she applied to universities in the United States. I basically served as her college councilor and helped her through the entire process in less than a month.  One day, as opposed to meeting in a coffee shop or something, I had the privilege of going to Catalina’s home. I had just recently downloaded the app that requests taxis for you wherever you are, so I just clicked the button and in three minutes there was a cab waiting outside my apartment building. After giving the driver Cata’s address, we began to meander our way north for about thirty minutes to a part of town that I had never been to. This was not the very poor part of Bogota; that is in the south. Based on the look of the apartment buildings and the types of stores that we passed, I decided it was the middle class district. In Colombia that means that yes, these people live in apartments rather than tiny brick shacks, but they don’t have the luxury of being able to pay $7 for a taxi ride as I had just done.

Once I found their apartment building and the gatekeeper let me inside I wandered around for a little bit before I found her apartment. When she opened the door a huge golden retriever enthusiastically greeted me and she ushered me into the room that served as the living room and dining room. Their chimney was covered in a green cloth and laid out all over the cloth was their nativity scene. The figures were a very eclectic group of animals and people of all sizes and clearly collected over the years from different places. In addition to the large nativity scene, there were pictures of the Virgin Mary and Jesus hanging on their walls and a little plastic Christmas tree in the corner. It had the warmest, most homey feel of any house I had been in in Colombia. Her mother greeted me with a big hug and invited us to sit at the dining room table and begin our work. A few minutes later Cata’s very frail grandmother emerged from on of the back rooms and with very trembling hands she held my head in her hands and then wrapped her tiny arms around my neck, all the while saying how enamored she was with me and how beautiful she thought I was. Cata kind of chuckled apologetically and I smiled to let her know not to worry.

Later, her mother asked me what I wanted to eat for lunch and after hearing that I would eat whatever she served me, she made the most typical Colombian home-style meal I could think of; beans, rice, fried plantains, and a piece of beef.  She kept apologizing that the meal was so modest and saying what an embarrassment it was, and I had to assure her many times that it was delicious and that I was very grateful. We spent that afternoon working on her essays and then later chatting with her older brother about the differences between universities in Colombia and the States. It was such a valuable experience for me to get to see how many Colombian families live and it warmed my heart to be welcomed by them with such open arms. 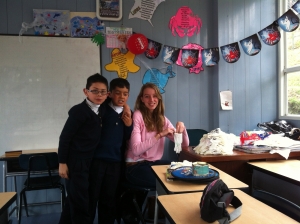 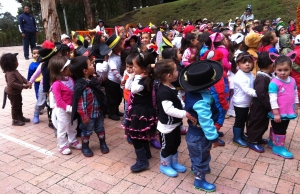 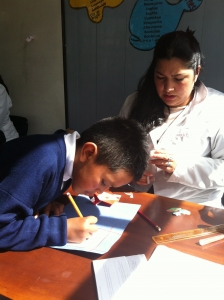 By Elsa Steiner|February 4th, 2014|Gappers in the Field|